Maybe you've been hearing about the Making Room for What Is community grief practice in October and wondering:

What is a Grief Ritual anyway?

I can answer this question in a few ways, but in general: a grief ritual is an intentional time to be in relationship with Grief.

It doesn't have to look any special way; however, it may bring some particular things to mind for folks.

I first became familiar with 'grief ritual' as a term through Subonfe Somé, the West African spiritual teacher who, with her spouse Malidoma, taught adaptations of Dagara spirituality to the West. What I have heard of the spaces she held was that they were powerful and expressive.

However, I never had the chance to study with her before she passed in 2017.

So although I haven't been directly shaped by her work, I honor Sobonfe Somé as a good ancestor in the lineage of this practice.

Grief Ritual with me is very simple and much more low key than I imagine the scene it may evoke for some of you.

This is mostly to be in alignment of my own experience, my level of skill and cultural context.

Despite its simplicity, participants have reported it being powerful and healing.

To hear more about what a Grief Ritual is (or can be) and what to expect in October's community practice, have a watch below.

Could you use more of a community container to explore and move through Grief?  Check out the Sanctuary NW's fall community offer happening October 15th:

Making Room for What Is: A Communal Ritual of Grief and Gladness 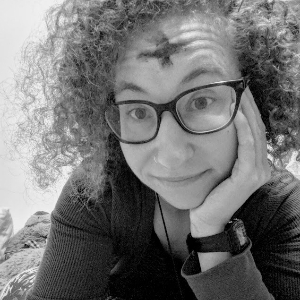 Kate Fontana is a Priestess and Psychic, dedicated to the beauty and mess of life in a body.

• Joining access to my online FB community, where you’ll get ongoing resources and support for your spiritual path

You're safe with me. I'll never spam you or sell your contact info.

● Joining access to my online FB community, where you’ll get ongoing resources and support for your spiritual path